Last year around this time, my GF and I took a road trip to visit my best friend  Mike and his GF out in Toledo, Ohio.  Last year we went to a German American Festival, and had a great time, but our timing this year was off.  We came out a week too early for the fest, but we made due and had a good time any way.

Got out to the same spot I fished last year with some success catching smallmouth bass while wet wading on the Maumee River.  When I came out here around the 4th of July, the river was unfishable, because, of high fast moving water.  Hoping that the water levels have decreased since then, I was hopeful to get out there and fish.  As we finished lunch at a pizza buffet, my GF and best friend Mike sat down on a bench in the shade and watched me do my thing on the river.

I brought my 5 wt fly rod and bait caster down to the water with me.  I casted a few flies, but had zero luck.  I waded back to the shore to some bushes I laid my rod down in, and swapped my fly rod for my bait caster.  I hooked up with a really nice smallie, but lost it to some sly aerial moves done by the fish.  After that, I waved for Mike and my GF to come down.  Mike refused, but my GF didn't, and it was a nice surprise, because, she normally would refuse, as well. 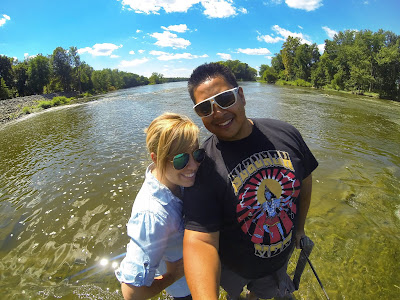 After my GF came down it was smooth sailing from there, I had lady luck on my side, and started to catch fish....some strange fish. Haha  I was tossing a chatterbait and working some of the deeper pools and runs/ripples, and hooked up with quite the eclectic group of fish.  Normally this lure catches me bass and northern pike....fish that I usually fish for.  On this day, there were no bass caught.

Next up on we have a Sheepshead. A strange fish that I do not know much about.  I caught 3 of these last year, and all 3 came in kayak bass fishing tournaments.

Last but not least - This fish was actually the first fish that I caught that day, and it was right after I took that picture with my GF.  She was about to go up, but I told her to give me 5 more casts, because, I wanted her to be there when I caught a fish.  Sure enough, 3 casts in, I hook up with something BIG!

What was it...I had absolutely no idea.  I couldn't tell what kind of fish it was by the fight, and it didn't show face until it was at my feet, and when I saw what I had hooked, I could not believe my eyes....My very first Flathead Catfish!  I've been wanting to catch one of these on the Fox River back home, because, of their size and what I hear about their fight.  This one lived up to the hype.  One thing I will remember about this Big ole Flathead was that it smelled absolutely horrible. Hahaha  Hand down the stinkiest fish I have ever caught.  Cool none the less. Haha

Before exiting the water and climbing up the rocks back to the bench my GF and best friend were, I spotted some trash on the rocks.  As I got closer to it, I took notice that it was a cast net.  It was probably washed away and caught up on the rocks when the river was flooded.  When I picked it up, a shed from a snake skin fell out.  I was thankful that it wasn't alive. haha  I gladly tossed that net, so, other animals would not get caught and die in it. #leavenotrace

With my limited allotted time, I caught some fish, smelled some fish, cleaned up some trash, and knocked a fish species off my catch list. It was a beautiful day.