The GF and I decided to head on down to Branson, Missouri for a mini vacay. While we stopped at Shepperd of the Hills Hatchery. It was quite interesting how they farm these trout to stock into the rivers/lakes. One of the tanks had some absolute pigs! I've never seen trout that were 5+ pounds in my life, and they were quite the sight.

During our 4 day stay I was able to sneak out and do some fishing early in the morning. I wanted to fish Table Rock, but knew the bass would be deep with the hot weather, so, I decided to fish Lake Taneycomo. I didn't bring any of my wading gear, because, I didn't think I was going to need them. I wish I had brought them, because, the water in that lake is flat out freezing! The first day I was able to hook up with a brown trout, but he self released after I removed the hook. Then I had nothing but missed hits using an olive wooley bugger.

I've never witnessed so many people fishing so close to each to each other until I fished Taney. There were guys lined up by one of the outlets of the hatchery taking turns tossing and egg under an indicator for a short 15 foot drift. I don't quite understand how that is enjoyable. They were all catch & release guys, too. Mind boggling to me.
Wasn't ever able to fish Table Rock. Every time we planned to rent a boat it rained. I definitely will be returning to Lake Taneycomo. The Bull Shoals is on my list for next time, as well.

Some pictures of trout that lived by the quote "keep your friends close, but your enemies closer." At one point I had 6 rainbows right next to me. 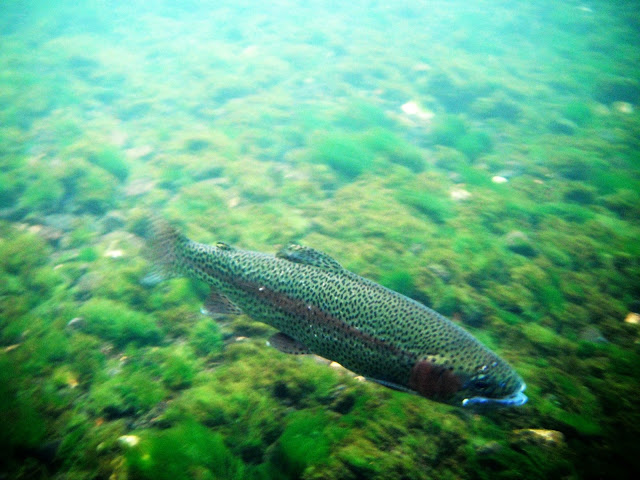 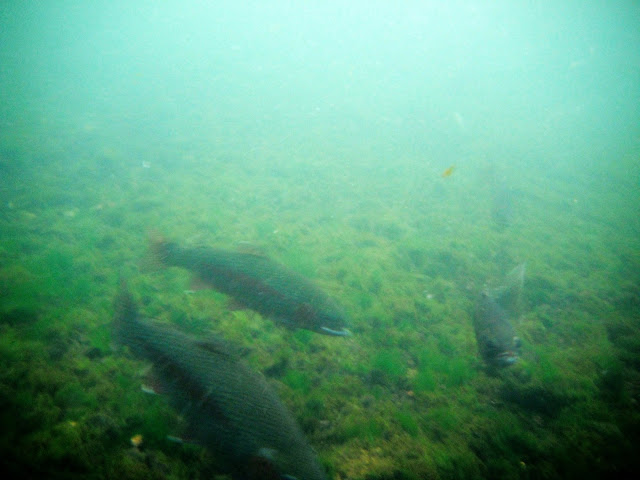 Took a day trip to the Blue River in Wisconsin's Driftless Area. 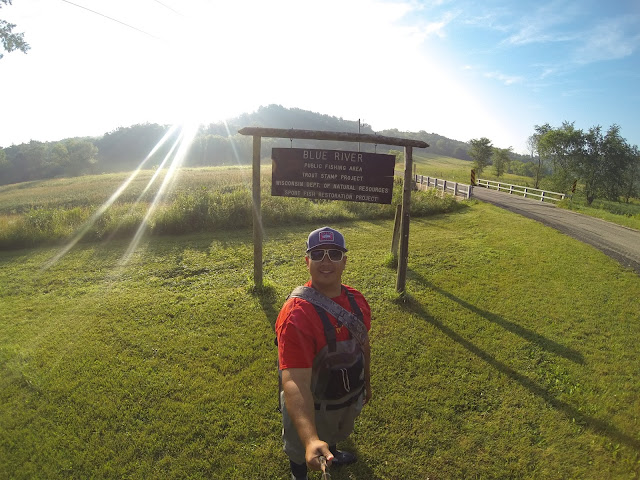 The Plan
Arrive at 5 AM and fish the morning. Mid day find a lake or hit the Wisconsin River for bass. Then return to the Blue River in the evening to finish out the day.

What Happened
I hit the snooze button, and woke up later than planned. I ended up stepping foot in the water at 7 AM, and I immediatly lost my first trout. After that I missed a few more, and caught 4 creek chubs. 5 hours later I was sitting on a rock in the middle of the small river. I tied on a new fly and let the current take it while I ate a quick snack. Right after the first bite of my cliff bar, my rod bends and I have a fish on, and I saw the flash of a trout. I just broke out in laughter. It was quite a moment, and I thought it was hilarious that my first trout of the day came from me taking a break.

On the wade back I managed 1 more brown. I also managed to step in a deep hole, and didn't realize that the water made it's way into one of my pockets....that my phone was in. So, I was in for a disappointing surprise at the car when I discovered that my phone was dripping water. Drove to the nearest town for a bag of rice, and just hoped for the best.

I decided to just end my trip and head on home soon after that.

...Hoping to return before the end of the season, and toss some hoppers. 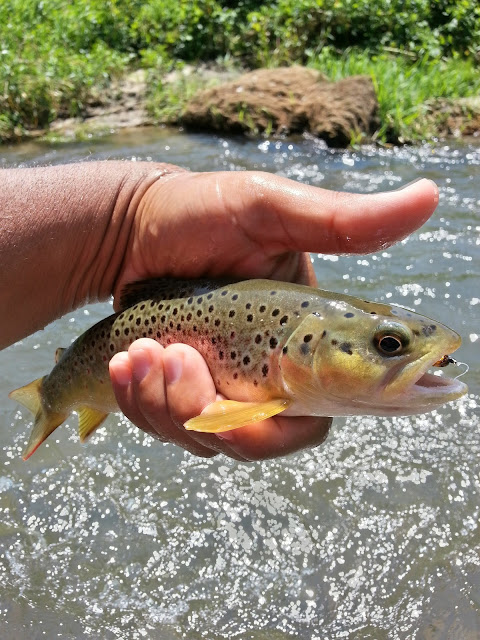 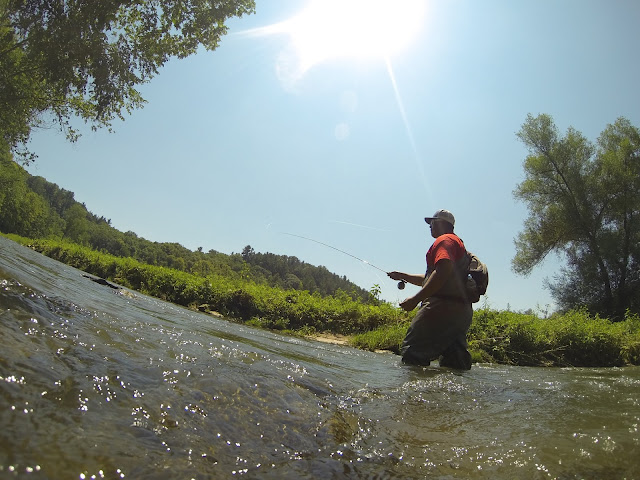 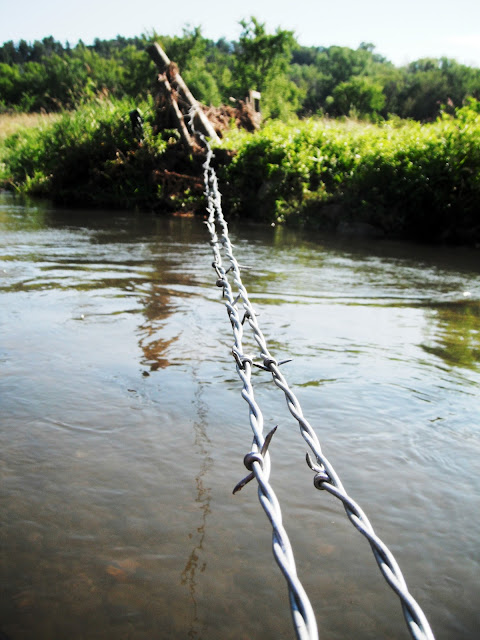 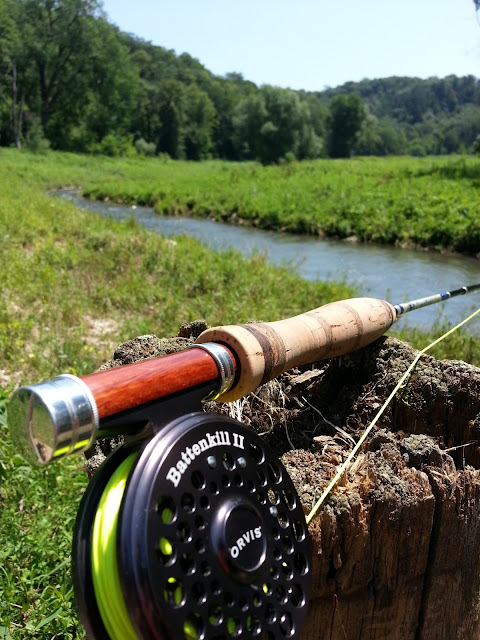 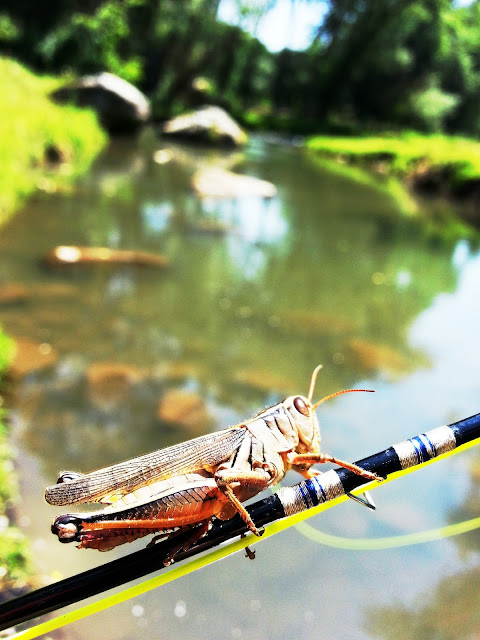 The hoppers were starting to come out, but I saw zero surface activity. Soon.....