The International Fly Fishing Film Festival will be back in town in 2016, thanks to hosting sponsors a Tight Loop Magazine (+atightloop), DUN Magazine (+Jen Ripple) , and Fly Squared Media. 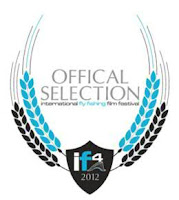 Venue - Star Cinema Grill (There are servers, so, you can order food and drink during the show.)

This event has sold out the past 2 years, so, it's wise to get your tickets in advance.  I've got mine purchased!  I can assure you will have a great time.  Lots of beautifully shot fishy short movies of places that most of us can only dream of going to, and lots of awesome raffle prizes.  What's not to like about all of that in the heart of winter!
Posted by CARF at 7:38 AM No comments: 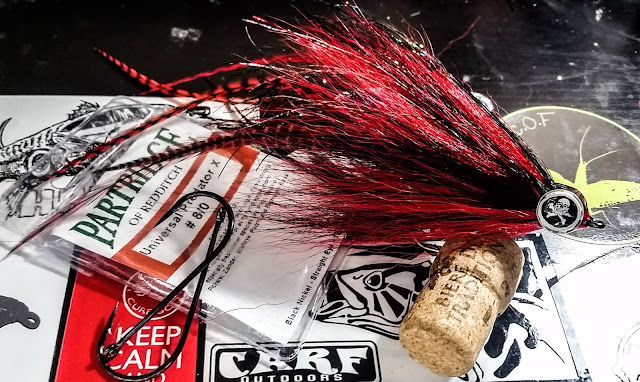 Grabbed my 3 wt and a few flies and headed over to Poplar Creek.  The water was still slightly high from the melting snow and freezing rain we got, but I've seen it in worse condition, so, I wasn't too worried.  The sun was shining and it was a brisk 20 degrees outside. 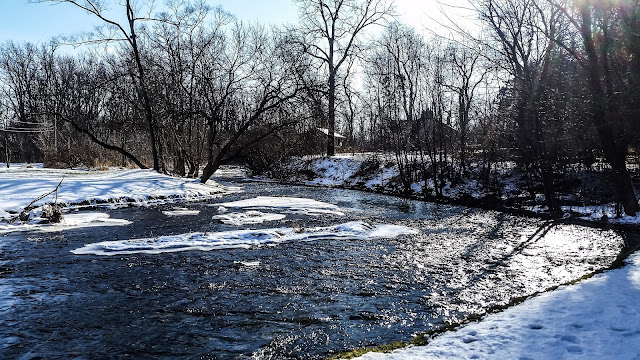 The scenery of the snowy banks and rock piles was a beautiful sight as the sun was reflecting off of the water.  The fishing was the complete opposite, but that's okay, because, it was a joy to get out. 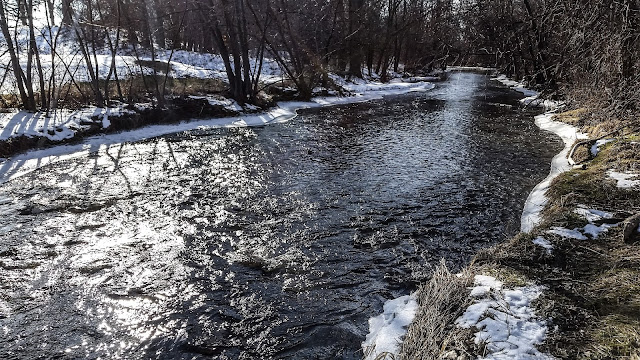 Shook a bit of the cabin fever off and cleared my mind.  Gotta love the free therapy that being outdoors and fishing provides.  I know I do. 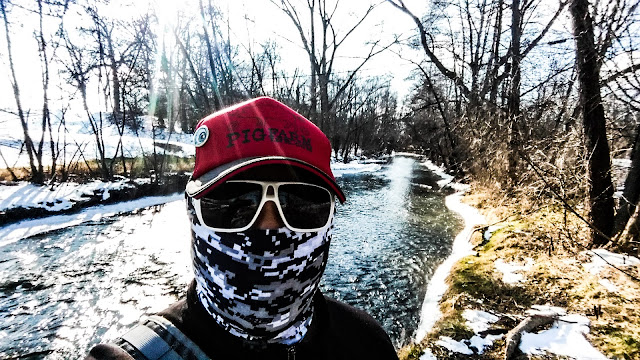 The River Falls Fly Fishing Festival aka R4F is happening in March in River Falls, Wisconsin.  It's 2 days of fly fishing fun.  One night you have the F3T and the next day you have a fly fishing expo full of all kinds of fun and awesome vendors, artists, and fly tyers.

Two of the fly tyers that will be up there are UA Dave and yours truly!

So, if you're going, stop by and say "What up!" and tell us your fishing spots....or you can share your fishing spots with me now, because, Dave and I, plan on wetting a line while we're up there.  We'll both have flies and stickers for sale.

March 12 - Fly Fishing Expo
I will post another reminder closer to the show with a schedule of all the seminars.
Posted by CARF at 10:02 AM 4 comments:

The Chicago Muskie Show.  It's always a good time.  Last year management switched along with the venue, so, I was skeptical of going.  However this year The Fat Gordo and DanK mentioned going, and I agreed to join them.

I, personally, don't have any specialized musky casting rods or reels or use any of the other equipment I see at this show, but I love going, because, I love chasing musky, and talking to others who are like minded.  Plus the gear is pretty damn cool!!!

The lures at the place are ridiculous!  You won't find 3/4 of this stuff in any big box store.  All of them are handcrafted by the individuals who are selling them, and while I will never own 98% of this stuff, but it's just hard not to admire the craftsmanship and thought behind all of them.

Chris is very knowledgeable about his craft, and his presentation on Fly Fishing for Musky really showed that.  He covered all the necessary equipment, flies, techniques, practices, and went in depth on some more, and answered some great questions from the audience.  After hearing he was bitten off 16 times on a flouro leader, I am making the quick switch to the knotable wire leaders.  Thanks, for a great presentation, Chris!

One day I was listening to ESPN's Mike & Mike, and they had Christian Laettner on as a guest, because, ESPN had an upcoming 30 for 30 documentary about him titled, "I Hate Christian Laettner."  During his interview on the show he mentioned that he is an avid musky fisherman, and has a website The Muskie Life.

Well, walking around the expo who do we see...Christian Laettner himself!!  Such a cool dude!

Meeting Christian Laettner was definitely the highlight of the Muskie Expo for me.  Turns out he has some pretty awesome stickers and t-shirts, as well.  His daughter is an artist and created this design for him.  Look closely at the markings on the musky, and you will see "Musky Life" hidden within.  This sticker will definitely find a home on my Yeti cooler.

There was much of the same throughout the show, but there was 1 lure that really stood out to me - Beaver Baits Trophy Musky Lures.  They looked like super duper sized game changer fly that was weighted with treble hooks, and a beaver tail.

These lures looked freakin' awesome, and the video they had playing showcasing it's action in the water made me want to buy one for the hell of it, but my wallet spotted the price tag and whispered to me that it's probably not a good decision.

Another cool product I seen at the show was this Just Encase fly box.  Just Encase makes some really shnazzy boxes that are fantastic for all of those big musky lures.  They just released a version of their box that is made specifically for big musky flies utilizing magnets.  Really cool innovative product.

One of my missions while at this expo was to find a lure to replace my buddy Musky Mike's top water musky lure.  Over the summer I casted one of his high into some trees - We're Huntin' Musky.  I was unsuccessful finding the exact same lure, but I am still determined that it will pop up somewhere online.  For the meantime I purchased this one that had similar dimensions and make up as his.  Hope he likes it! 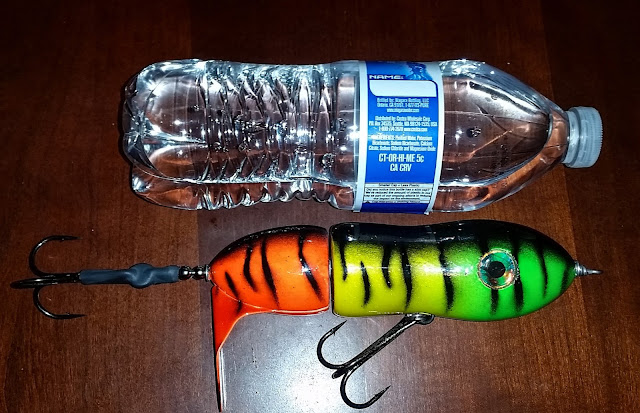 Ah...feels good to have dug up some motivation, and with that I sat down at the vise and tied up one of my favorite streamers.  A fly I have named "Minimum Cowbell."  It's a play on another streamer pattern named "Maximum Cowbell" created by Nick Granato.  Nick's pattern is articulated with 2 hooks, and mine has only 1...do you get the name for mine now? 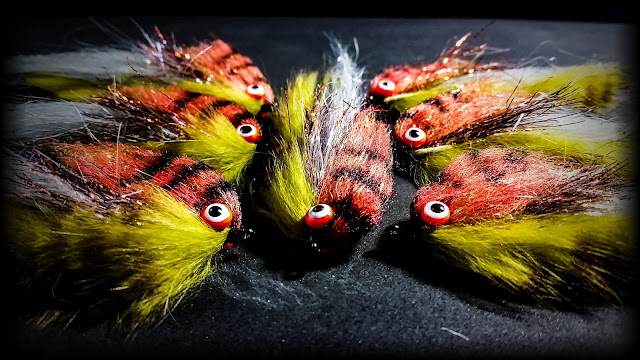 White meat.  Dark meat.  All will be carved.

Ready to hunt for bass, trout, and whatever else is lurking. 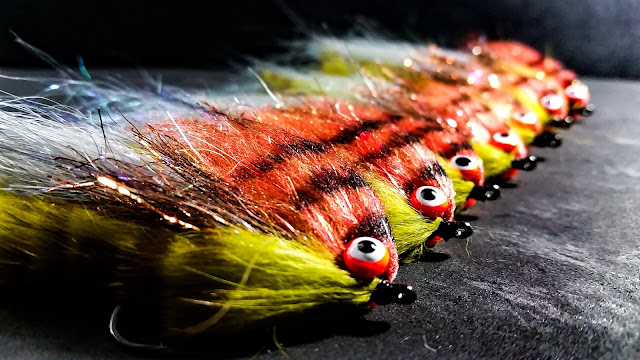 What's a trout or panfish fly box without some San Juan Worms.  A fly that everyone has in their box and loves, but doesn't admit it.  These flies simply catch fish.  These ones are for my personal stash.  I also fancied up the black bead head SJW with some black ice dubbing behind the bead. (size 14) 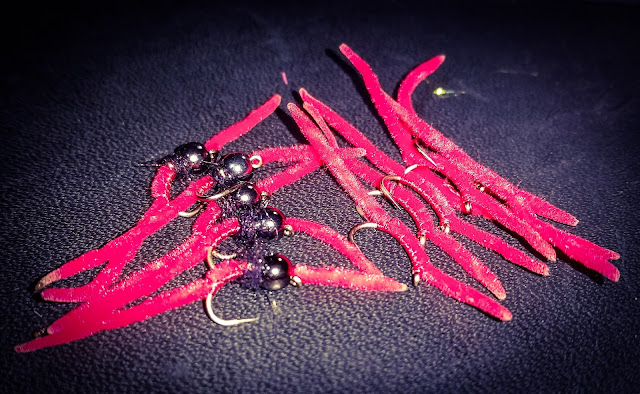 He covered the different species we can catch, flies that he uses for those species, gear, and access to the waters he fishes.  Dave talked mostly about Lake Michigan, and shared some great stories of 20-30 lb carp that really put his reels and fishing skills to the test, and the passerby's that offer him money for the carp that he catches.


Thanks goes out to NIFTY and Dave - t'was a good time!

For more information about NIFTY and CHI-TIE, please click on their names at the top.  This will bring you to their websites.
Posted by CARF at 10:59 AM 2 comments: