Upon my arrival to my favorite Northwoods area, I was slow to get the day started.  Exhausted from driving through the night after playing at an open mic took it's toll on me, but that's okay, I wasn't in a rush.  I had 4 days off, and nothing but time.

The morning weather was cool, in the high 50's, and some of the leaves had started to change into their beautiful red and orange colors.  Get those hoodies out, because, Fall has definitely arrived in the Midwest.

The fishing at my first spot on the river was slow.  The smallie's were biting, but each one I caught lived up to the "Smallie" nickname.  On my way to some other spots I marked on the map, I grabbed an always refreshing PBR, because, it's good to stay hydrated, right?

Feeling energized, refreshed, and hydrated, I began to chuck my lucky Northwoods fly that has been a favorite of the tank smallmouth I come across in this river since last summer.  I also caught my musky down in Tennessee in the Hardly Strictly Musky on the same fly back in May.  The fly did not disappoint, and wrangled up a few bigger smallies, and the tank you see below.

Hiking through the forest in this new area I came across quite a bit of bear scat.  Being by myself, I just started to do what I normally do when I'm hiking by myself, I started to sing songs from the Lion King soundtrack.  Hakuna Matata and I Just Can't Wait to be King will always be favorites of mine.  They work, because, I haven't come across any predators singing those songs, yet.

Continuing to fish the same fly, I came across a stunning section of river that just screamed "Musky" to me.  It was time to focus on what season it was - Musky Season.

After 2 follows from a huge huge musky, I moved down river a little bit more.  There was a big tree branch in the water extending out from the bank, and I tried to carefully cast near it, but instead, I snagged it.  Ugh... I gave the fly a hard strip and it broke a branch and became free, and as soon as that happened a musky came out and annihilated my fly!!!

Here's the dialogue from the encounter

What a fighter!!!  She gave me a run for my money and as I was trying to land the beauty, I fell down, not once, but twice.  I tailed her, and then dropped my rod and grasped her with my other hand, she shook her head, and my fly popped out -  WOW!!! 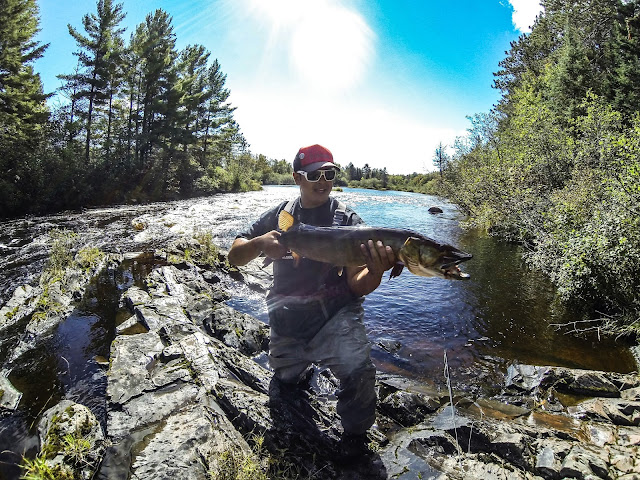 I was ecstatic!!!  Roughly 4 hours of fishing on my trip and I have already accomplished mission number one - Musky.  It was easy sailing from there on out.  Everything else was considered a bonus. 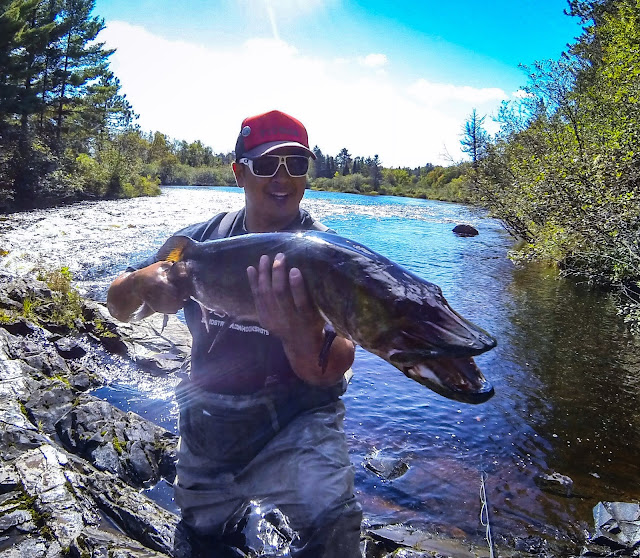 I didn't get a measurement on the emerald green beauty, but I estimated her to be between 36-38.

Whoever invented tripods - THANK YOU! 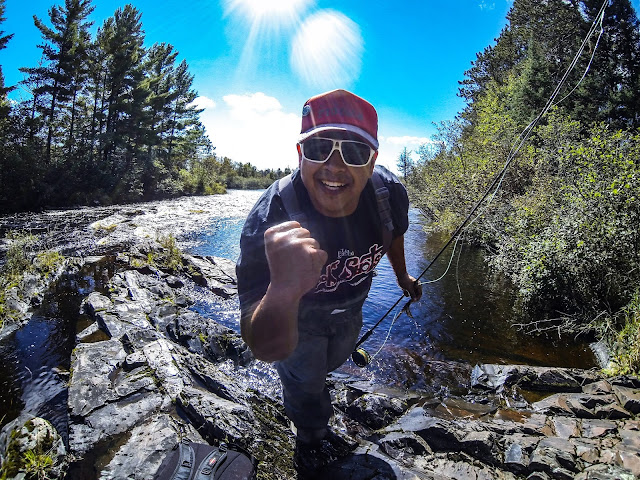 Finished day one with another follow from that huge huge musky I had encountered earlier.  Just couldn't get her to commit.  Caught a few more smallmouth, hiked, and just enjoyed the beautiful fall weather.  Ended the day with a drive to a nearby watering hole to partake in a good old Friday Fish Fry.

Today was a good day.

I am back from my trip, alive and well, refreshed and rejuvenated.  Although, I wish I could have stayed out in the wilderness a few more days, week, month, forever...ha

It was a total last minute decision to take off Thursday night for the Northwoods of Wisconsin.  With the arrival of Fall, I just knew it was time for me to get away.  The lure of the Fall colors, and it being "Musky Season" just forced me to take off and get lost.

I'm still sorting through pictures and thoughts...there's a lot of them, so, this story is going to come out in pieces.  I know what you're thinking, "F you CARF!"  Don't you worry, though.  I'm not going to allow myself to fall back into my slacker ways.  I have a need to keep the story telling alive!

Before I embarked on my 4 day solo adventure, a local bar my buddy bar tends at (Bigby's Pour House) was having an open mic, so, I decided to bring the guitar out and play some tunes in public.  It's been quite some time since I had done anything like this.  I had such a great time playing and listening to some of the local talent, and man, there are some talented individuals out there!  All in all, I think I did a good job.  I felt like an acoustic rock star.  Ha!  Looking forward to playing some more open mics, and possibly opening up for some friends bands.

As soon as I left the open mic night at Bigby's, I jumped on the expressway and started my trek North around 11:30 PM.  2 short parking lot naps, and 6 hours later, I reached my destination.  There were a bunch of deer on the gravel road, and all but 1 scattered off.  This one was confused at the departure of it's other deer friends, and didn't even notice I was there.  3 minutes later the young deer bolted off.  Hopefully, it doesn't sit around that long for hunters and poachers.

After another short nap in the middle of the forest, I was on the water.  It was beautiful out, and all of the small smallmouth bass were out to play, but no sign of Momma or Poppa. 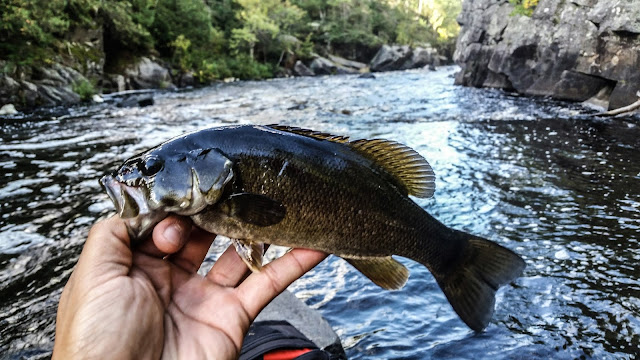 That is all the time I have at the moment.  Still sorting through pictures.

With today being the official first day of Fall, that means a few things to me. 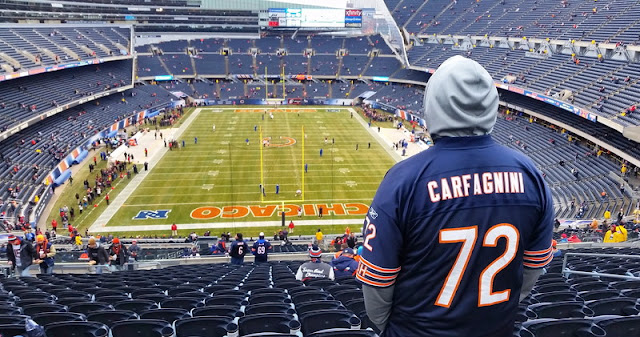 I will have you all know, that I am leaving tonight (9/22) for a much needed adventure in the Northwoods of Wisconsin.  I'll be exploring, hiking, kayaking, fishing, car camping, jamming out on my guitar, drinking beer, all while sitting by a small campfire and hopefully not eating cold hot dogs.

Basically being a complete fish/outdoor bum for the next 4 days...rediscovering my old self and decompressing with some good old fashion outdoor therapy.

It's going to be awesome, and I am stoked! 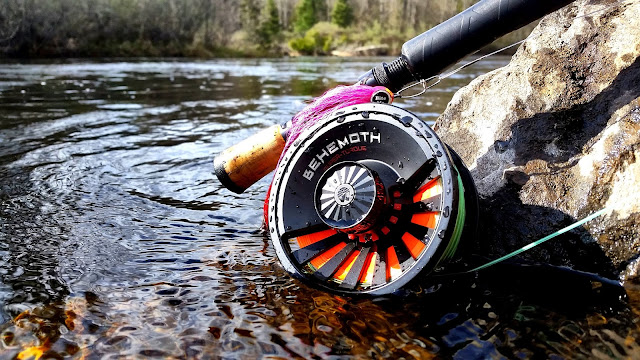 I hope everyone has a great rest of the week and weekend!!
Posted by CARF at 2:53 PM No comments:

Juice. We Can Still Go Fishing.

It's Monday, and I had planned to take my cousins Sam and Dom fishing after work.  It was storming most of the afternoon and in my head, the chances of us fishing were out the window.  I text my Aunt informing her that I don't think I'll be coming by to take the boys fishing.

When I finally got off of work there was light rain, but the skies to the west were all gray.  Once I arrived at home, I received a text message from my cousin Sam that read "We can still go fishing..."...and after a quick glance outside at the dark skies in the West, I said to hell with it, and told him that I was going to pick him and his brother up shortly. 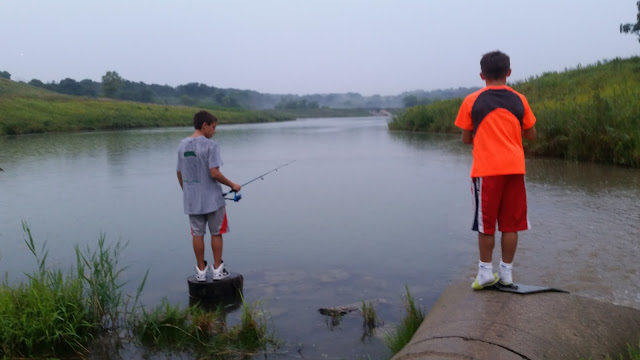 When we arrived to the lake, there was a steady drizzle of rain, but no thunder or lightening, so, we were all good to fish.  The boys didn't mind the rain.  They were just so excited to get out and fish.  Awesome! 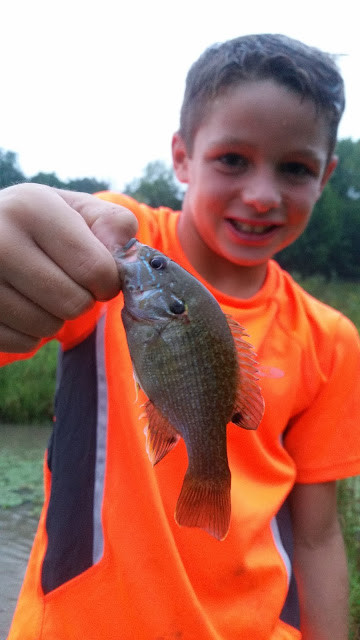 We all hooked up with fish.  My cousin Sam (Grey shirt) was the first to hook up, and he ended up with 2 on the day.  Dom (Orange shirt) caught 3, and ended up with 2 sunnies and 1 small bass. 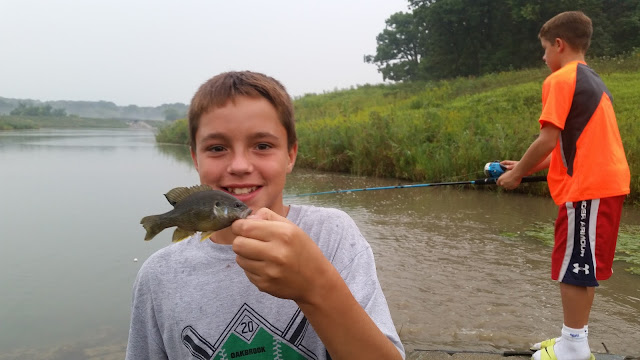 It was really awesome to see how excited they were to get out and fish with me.  I'm hoping to take them out more and more before the cold weather arrives. 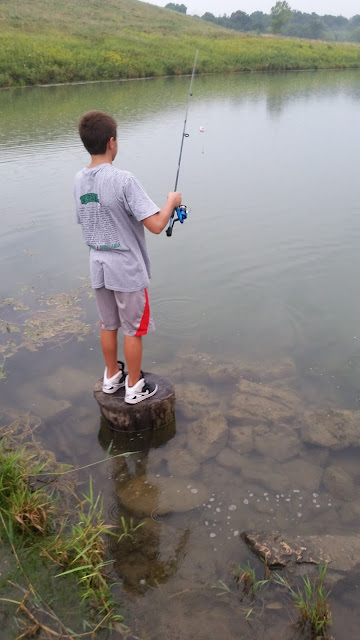 I ended up hooking up with a decent sized bass on a top water lure.  I was doing a lot more coaching than fishing, but that was A-okay with me.  I really wanted them to hook up with some bigger fish.  I know they will eventually.  They were super excited to see the big bass I caught. 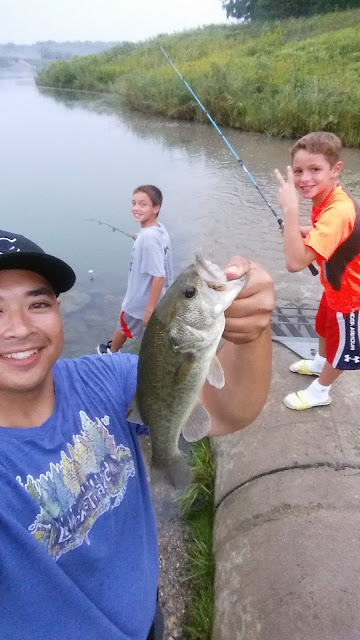 ...but they were also quick to remind me that they were up on me in the fish count numbers. 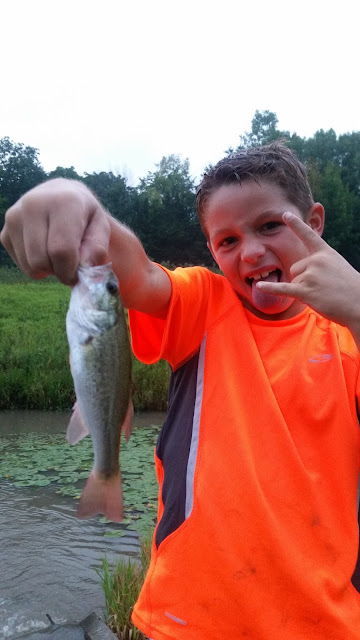 When the mosquitoes were too much to handle, we packed it up, and I treated my cousins to some cheese curds and ice cream from Culvers....a dinner of champions.  Ha 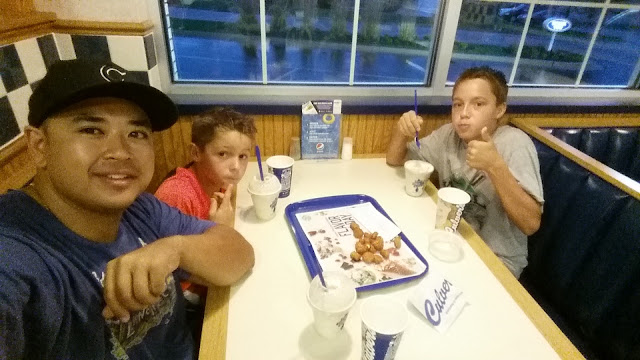 Always a good time when it's family time!
Posted by CARF at 6:00 AM No comments: 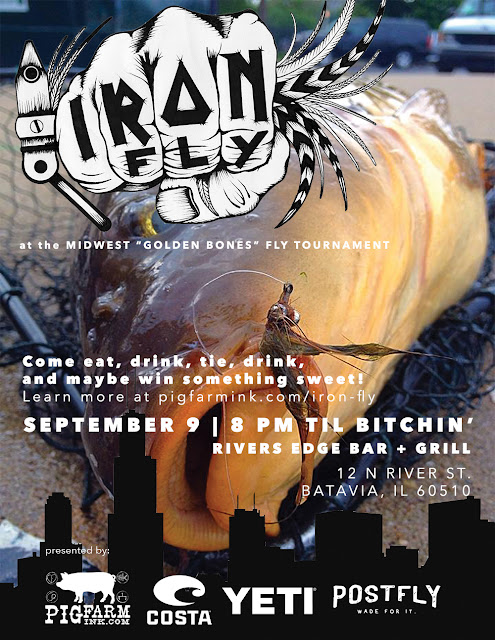 The Midwest "Golden Bones" Fly Tournament is 3 days away!!  This Friday is the first day of the event, and not only will it be a meet and greet with a run down of the rules and information, there will be beer, food, and a PIG FARM INK - IRON FLY event hosted by yours truly!!!

It's going to be one helluva time!

Big thanks, to all of the sponsors for the PFI Iron Fly event - Costa, Yeti, Post Fly, and of course my dudes at Pig Farm Ink!