Bob Mitchell's Fly Shop in Saint Paul Minnesota just dropped some big news for all Minnesota fly fisher peoples.  You can for sure count me in on this, although I'll be out of town in Sioux Falls South Dakota from June 19-23rd for a work training course, so, I'll be at a huge disadvantage missing the majority of the week.  Oh well, it's going to be awesome.  Peep the details below! 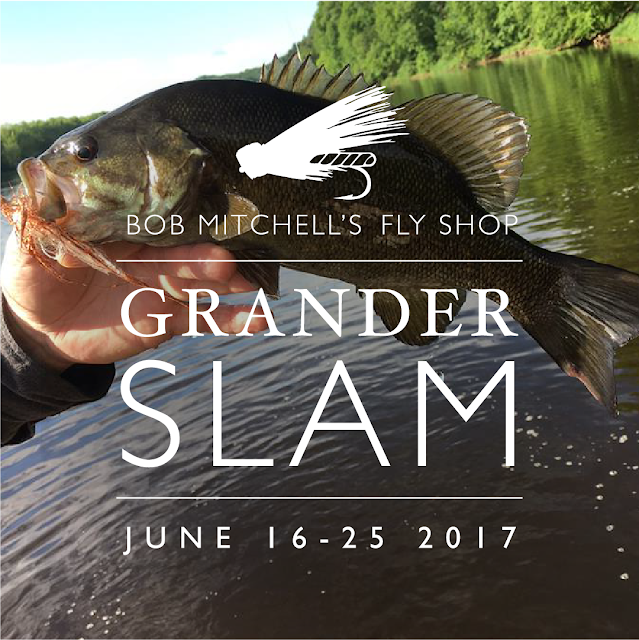 Details from the original post.
In this land of 10,000 lakes, 70,000 miles of rivers and streams and 162 species of fish (according to Wikipedia) we have fishing diversity that is second to none. This summer let's celebrate what we have with the 2017 GRANDER SLAM TOURNAMENT. Starting June 16th and spanning 10 days to June 25th, the fly angler who catches the most species of fish wins. So clear your calendar, and get ready to use up some over due PTO. Be ready to explore new waters and techniques. You're going to need to get out of your comfort zone to win this one. Registration will open 6/2. More details to come. #GranderSlam2017 #mnflyshop

Now that Winter and Spring have gone, the open tie nights at Lake Monster Brewing hosted by Bob Mitchell's Fly Shop have come to a close.  For those of us that don't ice fish or do any winter fishing, it's a great excuse to get out of the house, drink a beer, talk fishing, and shake off that little bit of cabin fever.

The last open tie night was back in April, so, I know this is a very late post, but I still wanted to share.  These open tie nights, were super beneficial to me while being new up here.  It allowed me to get out and make some friends, and have some fun at the same time.


I've tied a few flies, but mostly socialized at these gatherings.  It was a great way to put some faces to quite a few people I have interacted with through social media.

The picture below is a funny one - I was told the moon was out, and it did look out, but something was a bit fishy about it.  I didn't have my glasses and don't see very well at night for distance, so, I was almost fooled.  Almost, Rhea.

BIG THANKS GOES OUT TO:
BOB MITCHELL'S FLY SHOP
LAKE MONSTER BREWING
Posted by CARF at 8:22 AM No comments:

This is a super late post, but back in March...or was it April.  I have no idea.  Sometime this early Spring I went fishing.  It was fun, and I was given some trout fishing lessons from Joel Ebbers, Matt Ebbers, and Aaron Przybylski of Scavenger Fly as they sat on the bank of a juicy run and watched me fish.

Aaron and I started out with streamers, but switched over to nymphs and the fishing really turned on for everyone but me, but that's expected, because, I have no idea what I'm doing.

Almost forgot Mr. Jim Aronson was there at the start of the day, but left early....and of course he did what he always does - catch fish.

Big thanks to the guys for showing me the ways of trout, and how important it is to mend your line.  An extra big thanks goes out to Joel and Matt for picking up my net that fell off of me while making my way back to the car.  Oh, and a nice to meet you goes out to Jake White who we came across on the walk back. 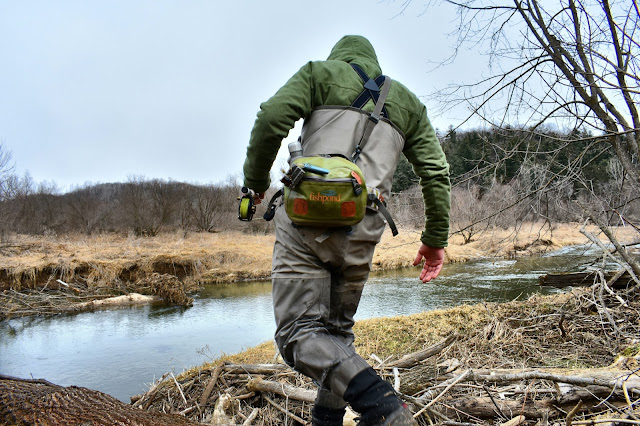 The photograph above shows a beautiful healthy smallmouth bass, a big smile on my face, and my ever so popular white sunglasses, but there's a big issue that is not shown in the photograph.  This fish was caught during the closed season for bass here in Minnesota, and I had no idea.

I had completely forgot that I wasn't in Illinois, and overlooking the fact that each state has different regulations, even for catch and release.  I'm thankful for the 2 guys that shot me a message to inform me, because, I would have kept fishing on my lunch break while unknowingly breaking the rules.  Big shout out goes to Tom of Voyageur Pursuits and Aaron of Scavenger Fly.  You guys saved me a future fishing ticket, and I THANK YOU!

If you're traveling or have moved to a new state, don't be like me, remember to check the regulations.