We put the boat in at 6 PM, and what a perfect time.  There were still a few pleasure boaters out and about, but they were decreasing in numbers as time went on.  The waves in the lakes were starting to go down, and it was a cool sight to see.  I've never seen these lakes without waves.  It was a beautiful thing.

We started out casting inline spinners, and then we began to toss some big top water lures that splash down in the water like a cannonballs.

As the night progressed, we did not see any fish.  There were a few other musky hunters out, and they were having the same luck that we were having. 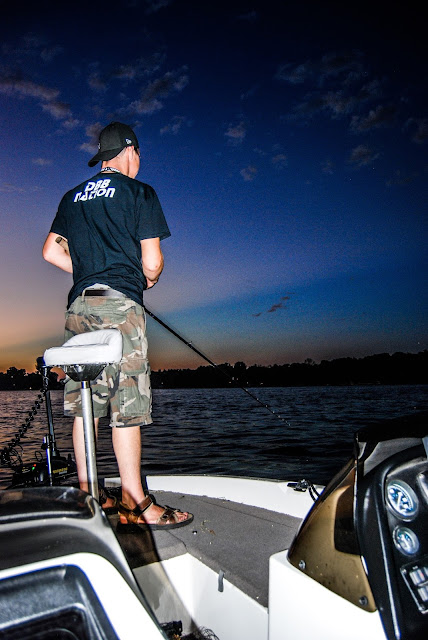 It was getting late, and the time was 11:30 PM, and we were just talking about heading back.  As I was making a few more casts into the darkness of night, one of my casts did not find water.  Instead we could only hear the not so joyful sound of leaves.  I just casted an expensive lure of Mikes into a tree.  No other words can describe how I felt other than "SHIT."

We tried everything from the boat, and then Mike decided to climb the tree...and he did.  Turns out, I cast the lure so far, that it went beyond the tree that was nearest to the water, and into the tree behind it.  Hilarious...but not really.

There were no fish caught, no follows spotted, but there were a few beers drunk, and a good time had.

Big THANKS goes out to Mike for inviting me out.