My buddy DanK and I decided to meet up for a wade on our favorite small creek. I was up extra early, so, I decided to fish the backyard lake a little bit, and work on my wacky rigged worm technique. Caught a decent one before I called it quits and hopped in the car to leave. 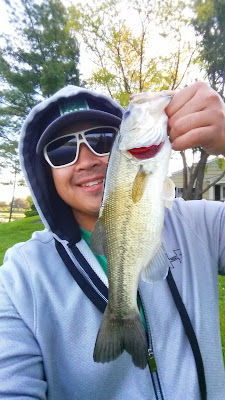 I was tossing a fly on my 5wt, and DanK was using his spinning rod. There was no action on the creek, and with the rising sun, the temperature started to rise. It was not making for a fun wade. Now if we were catching fish, I wouldn't mind being in my waders sweating my butt off, but as a skunked outing loomed over our heads, I just wanted to be out of my waders.

We decided to fish on until we reached our determined turning point on the creek. Immediately, DanK got a follow from a very small pike, and then on his next cast he hooked up. At first we were both thinking it was the pike, of course.

....but it actually turned out to be a quilback! I have only ever seen 2 of this species in my time fishing, and both have been caught by, DanK. He's like the quilback whisperer. Haha

As we approached where our cars were parked, BOOM, we doubled up to end the day. Pretty awesome. I was able to shake the skunk in the final moments.

After we finished up the wade, we headed on over to my house. DanK hasn't seen the new place, yet, and I've been ranting and raving about the fishing I have in my backyard. DanK is like a Jedi Master with a jig and soft plastic trailer. He was tossing a Tight Rope Jig with a small crawfish pattern plastic as a trailer, and he killed it!

I never knew there were bass of this size in my backyard lake until DanK started landing monsters. With every bass he caught, it seemed like they just kept getting bigger. It's really good to know this exists in my backyard. I have yet to catch these big ones, but I sure do like knowing their in there, regardless if I catch them or not.