Bret is a rad dude with laser like focus when he's tying trout bugs.  He also in a band Too Pure To Die.

Some times that focus affects Bret's periphreal vision, and he has trouble sensing dangers in the form of A-A-Ron looking intently for the right opportunity to pounce on him.
Here we have Drew and Josh.  Josh is really cool, and has some mad skillz at the vise.  Drew...we just don't know about.
One of the guides that works out of Bob Mitchell's Fly Shop is a super fishy dude, and his name is Evan.  He has a goal to tie 1 million of these white murdich minnows by winters end.  Not even 1 month in, he's 1/3 of the way to his goal.

Grant and his wife are some pretty rad individuals.  They like cooking bacon on their flattop grill, and posting ridiculous pictures of each other on social media.


Below we have a picture of something that simply cannot be explained.  Rhea, Matt Ebbers, and myself just couldn't keep a straight face while Grant just looked over at Ashley like this was a normal occurrence.  Can you take a guess at what was happening here?

Eddie Rivard has a black belt in bugs.  Here is a rare shot of him sharing his knowledge to Josh, Micah, and an unknown dude for free.

Mike Carina is super creative...how do I know?  Well, he has a website appropriately titled Carina Creative.

Eddie Rivard is also an International Fly Super Model.  Here he is helping Carlin Samela show off some of his most recent musky flies for free.  Such a charitable man that Eddie Rivard is.

Andrew Muntz is a flure tying machine.  Some people make balloon animals, but Andrew makes fly animals.  A little kid walked up to him at the brewery and asked him to whip up a lion, and he did.  Mad Skillz.

...another fun night at Hops & Hoppers. 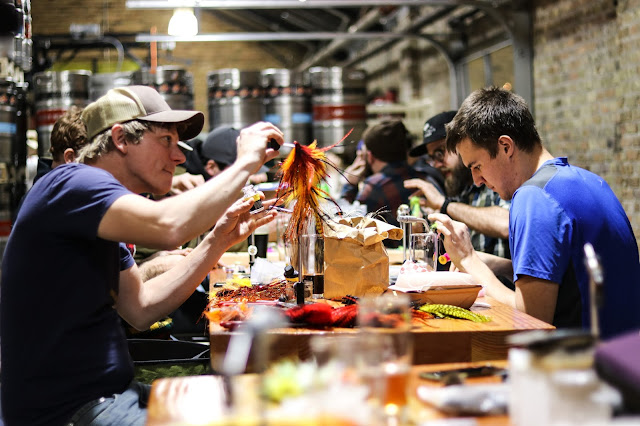