Dave, Chris, and myself arrived in McMinnville, Tennessee, and our agenda looked like this...
Here we have Dave and Chris checking out the map, while I take a picture and ponder how soon our next U-Turn will happen.  We made a couple thousand of them at this point.


We found some barbecue at Blue Smoke BBQ in Sparta, TN.  I had the brisket sandwich, and it was excellent!  I wanted to get another, but I didn't want to spoil dinner.

After some food we did some more scouting.  We arrived at a bridge that overlooked a river we deemed "Plan A" ...but it looked more like a last resort.  I was actually pretty impressed with the color of the water.  Never in my life had I seen an opaque river.  You could have slapped a Yoohoo Chocolate Milk logo on the bridge and I would have believed that's what the river consisted of.

What did not disappoint was dinner and drinks at the Foglight Food House for the kickoff party.  They served us a Cajun style blacked catfish with some dirty rice, and jambalaya...Damn that was delicious.  Todd Gregory of Towee Boats gave everyone a great big welcome, and layed the ground rules of the event.

"Don't be an Asshole"

Up early, and on the water by 7/7;30 AM.  We were fishing from a canoe, and kayak.  Dave constructed some pretty sweet outriggers on his kayak, and it really helped him and Chris stand up, and cast at the same time.  The first 10 minutes of the float, Dave, had a follow from a upper 30's low 40's musky.  That got us all pumped for the rest of the day.

At approximately 10:05 AM we were working this deep pool.  I was casting a 4/0 single hooked fly that I tied to look like a rodent over some submerged timber piles.  Out of one of the piles, a musky came out and SMASHED my fly.  I set the hook, felt the weight, and the fight was on!  1 second later, my line went slack and I felt nothing at the end....

...My heart sank, and I just thought to myself I just lost a great opportunity to get on the board.

Next thing I know, my rod doubles over, and my rod tip goes into the water.  GAME ON!!!  The musky had swam right underneath the kayak in search of deeper water.  After quite the battle, I was able to wrangle the musky in, and received some help from Josh, Dave, and Brent netting the fish, and even more help from Austin Green and Katie Blizzard photographing and measuring my fish.  Thank you all, for the help!!

After the release, the rules stated we had to text the time, and length of the fish to Todd.  My musky weighed in at 31 inches. I received the following text back, "Right on! You're first!"

I could not be any more stoked than I was.  I just hooked up with the first musky of the tournament! 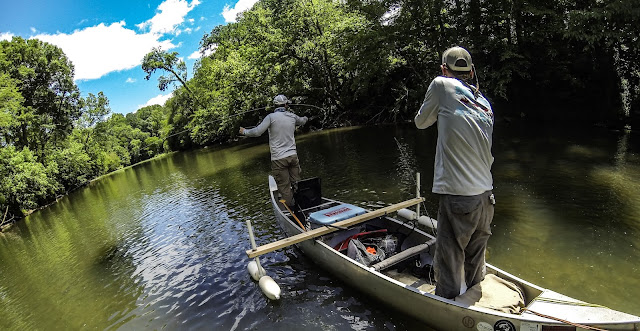 Later in the day we stopped for a shore lunch.  Fellow flat landers Kurt @Midwest_Waters and Mark floated by us, and we started back up with about 150 yards between each other.  Approximately 10 minutes after I took the picture below, Kurt lost a very big musky.  We all heard and saw the splash.

I could tell, that it was one helluva fish, and as we floated by them, Kurt just stood on the bow, and Dave said, "Dude."...Kurt, simply said, "I don't want to talk about it."  A feeling we all know too well chasing these apex predators. 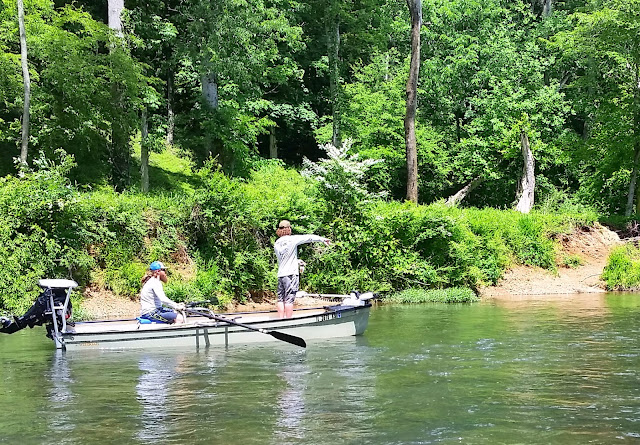 We arrived at the take out a little sooner than we expected, but I think we were all pretty happy about that.  Downed a few more beers before taking our time loading up the gear and calling it a day.

Dave and I ended the day with a couple follows each.  For some odd reason Chris did not see any action at the tail end of his flies.  I caught the only musky for our team on Day 1, and that had us on the board.  Looking forward to Day 2 on the water. 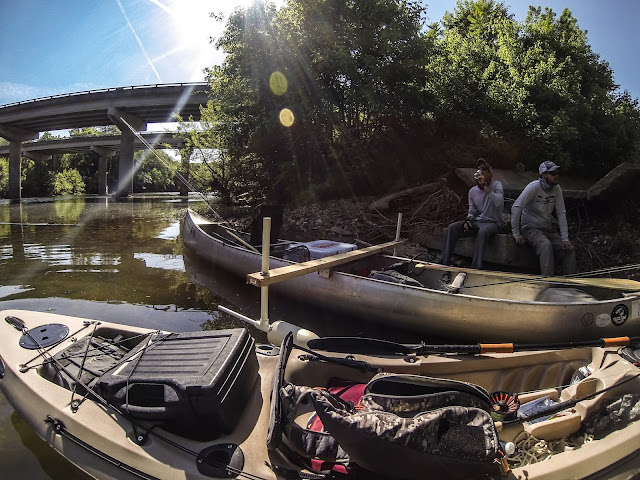 Day 1 of the actual HSM tournament is in the books, and we all had to meet at Towee Boats headquarters at 7 PM sharp.  Beer, burgers, and other food awaited us.  There was live music, the beer was flowing, and musky was the topic of all conversation.  Then there was a raffle for all of the door prizes provided by all of the sponsors Patagonia, Monic Fly Lines, Flymen Fishing Company, Costa, Flood Tide, and many more.  This was just the end of the first day of fishing, how much more awesome could it get! 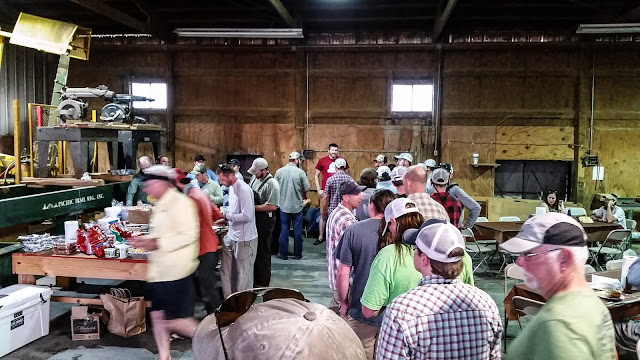