Obsessed with the Northwoods

***FOREWARNING***
This is a picture heavy post, but it's worth it.

One day mid June, The Fat Gordo, hit me up and asked if I wanted to head North....my answer was YES!

What perfect time, as well - The Fat Gordo's birthday was the 12th (Friday) and mine was the 14th (Sunday - Flag Day). It's funny, because, the two of us really don't like celebrating our birthdays, so, it was kinda perfect we spent it on a river in the middle of nowhere with one another. Ha How cute, right?

I casted 3 flies the whole trip, and found great success with a brown pattern I had tied this past winter. The Fat Gordo used his usual double blade inline spinner, and mixed it up with a frog. 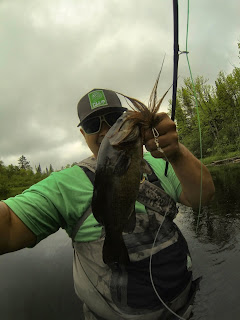 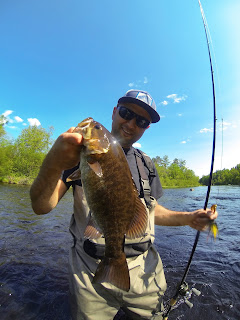 The smallies were definitely ready for us, and wanted to do battle with us often. These river smallies never cease to amaze me with their strength, heart, and willingness to hit big ole musky flies.

This particular small jaw (pictured below) put up one hell of a fight, making multiple runs, and never giving up. I could not believe the fight this one put up against my 10 wt. As it was bent over, I shouted to the Gordo, "It's a TANK!....Whoa!!!!!" As I held her up, Gordo and I, were in awe of her beauty. The colors and markings were just beautiful. After a successful release, Gordo and I, must have high fived and fist bumped a hundred times. Good times!

After a super long wade...which should have been split into 2 days, we decided to find a backwoods road I know of in the dense forest, and hike it back on land. We knew that it was going to be a very difficult wade back, and both of our legs were jello. The Fat Gordo already took an accidental dip in the river, and we didn't want to chance anymore.

Walking along the road we came across this big bad momma. She was relaxing in the middle of the road soaking up the last of the sun, and did not like our presence. We saw a few areas on the road where it looked like something was digging. The Gordo and I, started to think she was looking for a place to lay eggs. I'll have to do more research on that, because, I'm curious. Anyone have knowledge of snappers and when they lay eggs and where?

Also, I am still AMAZED at how fast they snap. She snapped at my GoPro camera, and my jaw dropped. Excuse my language, but HOLY SHIT!! I advise everyone and their mothers to never put your fingers near their face, that is, if you still want them. It's safe to say that I will never go noodling after this experience. F THAT! Hahaha

...and of course no trip North is complete for me without stopping and picking up a 6er of something from Wisconsin's finest breweries, New Glarus. I usually go with Moon Man or Spotted Cow, but I've never seen this one before, so, I gave it a try, and I was very pleased with it. 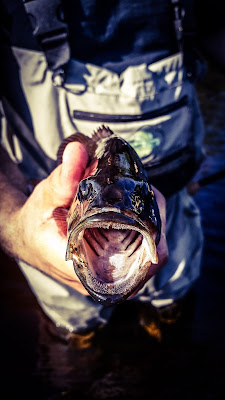 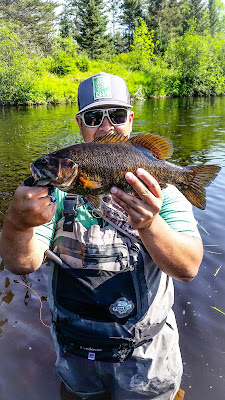 The Fat Gordo was determined to catch a smallie using a frog, and he was successful. The first one he did not get a photo of, because, of some sly tactics from the smallie after the Gordo removed the hook. The small jaw pictured below fell victim to a Booyah frog, and you can just see how happy the Gordo was, but I know he wanted a picture of that first one.

What a great trip. There's nothing better than having a successful trip, getting back to your truck at the end of the last day, packing up all of the gear, enjoying a quick lunch, starting the truck....trying to start the truck...SHIT...the truck didn't start. I forgot the headlights on. The Fat Gordo's truck does not have a beeping notification telling you that you left them on, in turn, leaving you with a dead battery if you leave them on.

So, here we are, a few miles away from the main road, in the middle of nowhere USA, on a Sunday afternoon. Luckily, we were able to get a hold of a 24 hr wrecker service that was very familiar with the area we were in. 1 hour later...the truck received a jump, and we were finally on our way home. 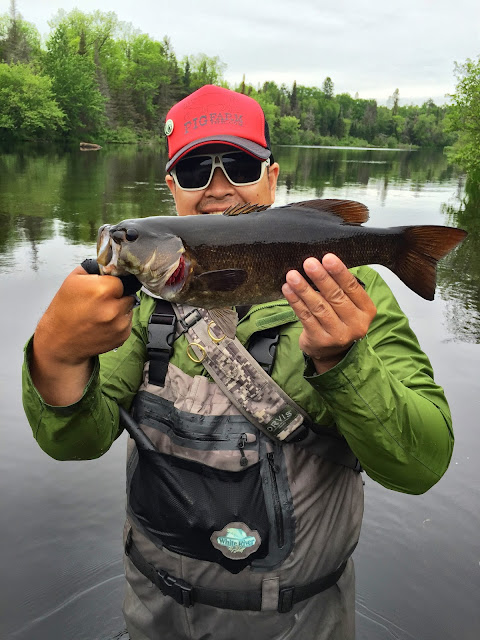 Already looking forward to my next trip North.
Posted by CARF at 11:19 PM