Just thought I would share this video I came across. I have never seen footage of how vicious wolves can be. I feel bad for that coyote, but he seemed like he was aware of the consequences. Those wolves really F'd him up bad!


Notice the bald eagle scavaging! Reminds me of the time I saw a bald eagle up north scavaging on a dead deer on the side of the road. 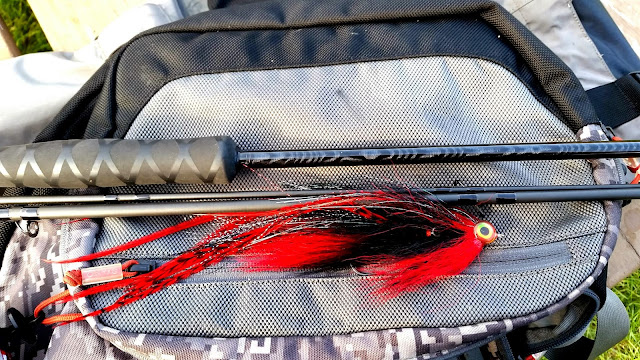 Last October (2013), after breaking my 9 wt rod on my fall musky hunt. I was chit chatting with Ed over at FSA Custom Rods, and he talked me into having a backup rod. He didn't have to do much selling on the idea, because, it was already in my head. I mean, why in the world would you not have a back up rod, especially on a fishing trip. I'm such a critical thinker. =)

As the two of us were talking about the build, we both were throwing out the same exact ideas, at the the same damn time. It was extremely hilarious and awkward at the same time. I was starting to think he was literally in my head. We both thought it should be a stealthy build. Black on black with some gunmetal gray mixed in.

Those throop/tiger wraps really make this rod a thing of beauty. Ed does some outstanding work, and it shows. 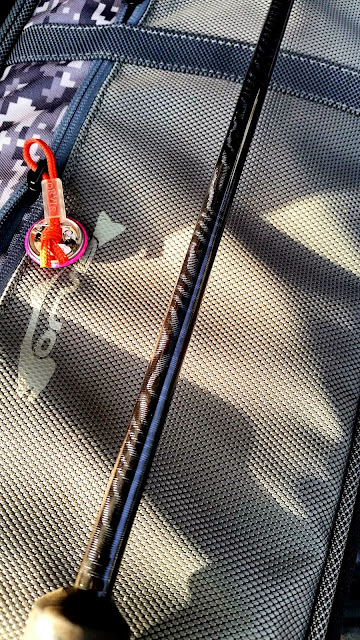 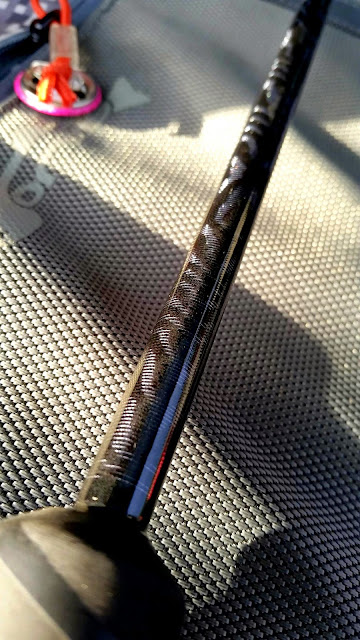 More specs on the rod.
I could not be any happier with this rod. The grip on it is fantastic. It doesn't get slippery and it seems to have saved my hand a few blisters. It's performed great, and I cannot wait to see what other big fish this rod helps me land...steelhead...tarpon...snook...a shark? Hopefully, all of those! 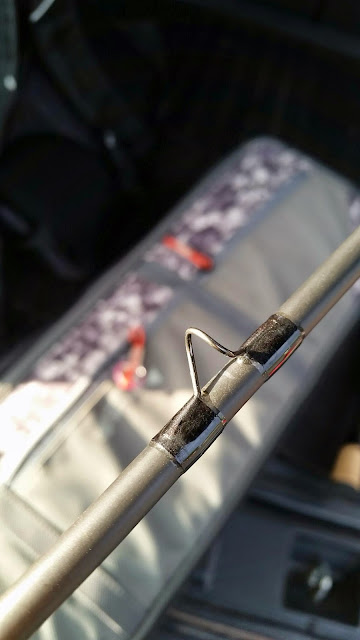 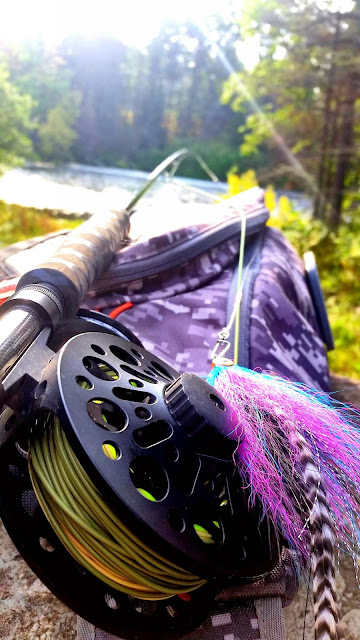 If you're interested in contacting Ed about a possible build or if you have any questions about rods, fishing or beer (Ed is a fantastic home brewer) I'm sure he'll be glad to answer your questions. He's a good guy, with some serious talent.

I BELIEVE IN DRAGONS
Posted by CARF at 9:52 AM 5 comments: 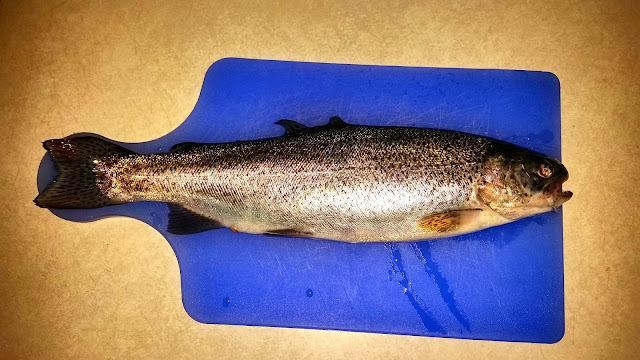 Gutted it.
Decapitated it.
Garlic stuffed it.
Soy sauce bathed it.
Lemon juice spritzed it.
Tinfoil wrapped it.
Baked it.
Ate it. 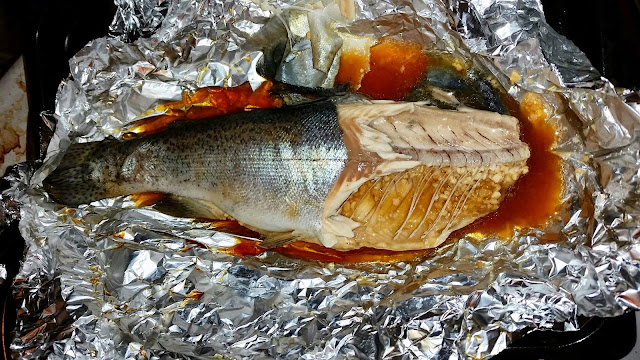 I've been fairly busy these days. This past Saturday was the Fall trout opener here in Illinois. They stocked the lake down the street from me after they stocked it with a bunch of rainbow trout. The lakes been closed for 2 weeks, and now it's finally open. With the sun going down around 6:30 PM, it's only logical to fish this lake after work during the week, and now that it's stocked with trout, for as long as they last....Bonus!

Made it out on a dreary Monday evening just as the sun was starting to set. There were a ton of guys, but I was lucky and was able to get my favorite spot on the lake. I am usually 95% catch and release, but I paid for the inland trout stamp this year, because, I wanted to give these stockers a go in the kitchen. I didn't feel all too bad about it, because, it was either me or someone else taking these trout home. So, why the heck not, right! 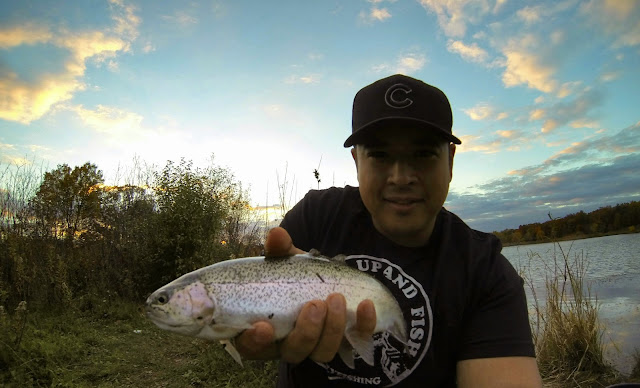 Next stop for this rainbow...my dinner plate.
Posted by CARF at 7:45 PM 5 comments:

This first one I will never use, but it it definitely cool. It's a hand made, hand painted, and designed musky lure from the Lake St. Clair Muskie Guides. An ex-girlfriend of mine bought it for me, as a gift. While I will never use this lure, it's still pretty cool, and I am sort of a tackle junkie. 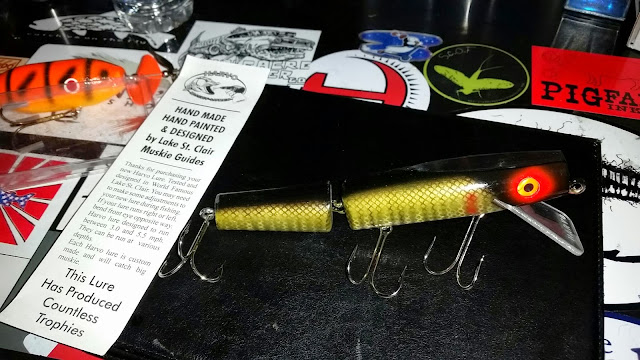 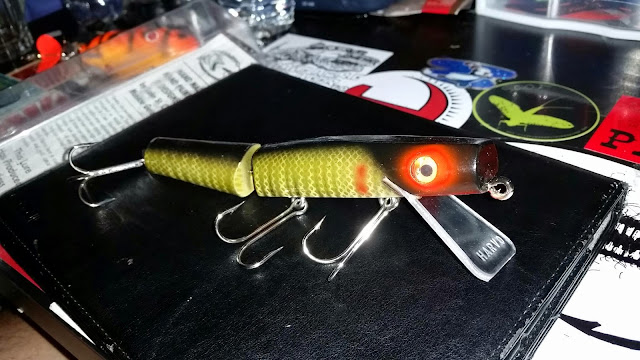 This top water lure on the hand, I want to use. I bought this at a local Musky Show last year. The only problem I currently have with this lure is, I don't have a rod & reel set up to handle the size. Maybe next year...or maybe it'll just stay a decorative piece. 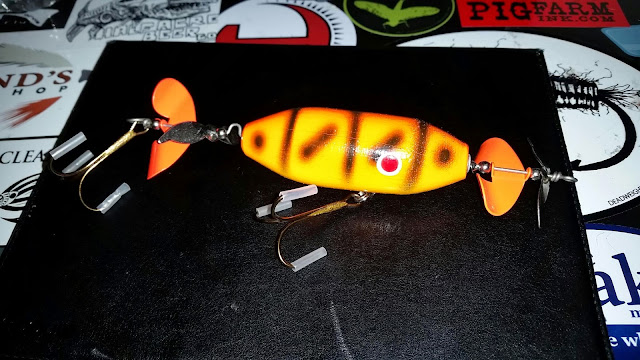 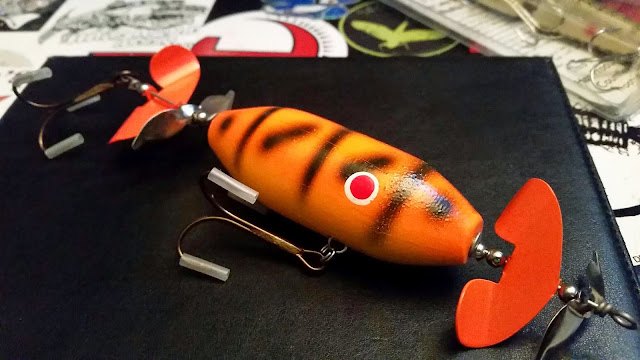 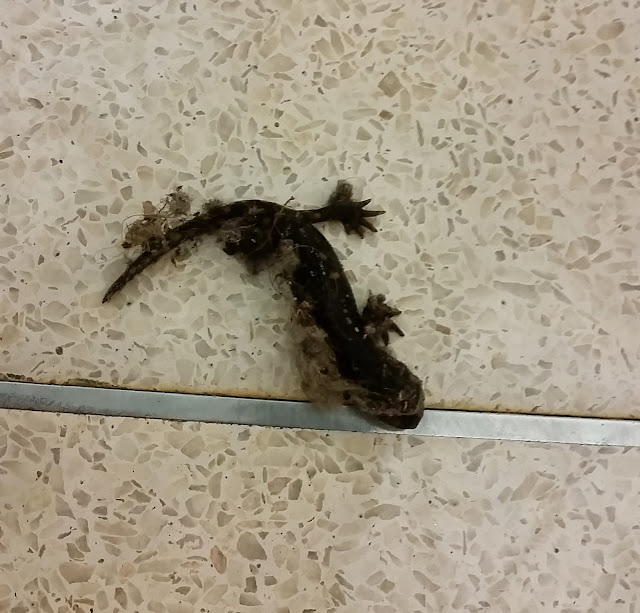 I scooped him up in a container I got from the cafeteria, and it became my office pet for the day. I put a small amount of water with him inside of the container, and poked a bunch of holes in the top for air. I was also able to get all of the dust, and lint that it collected off. 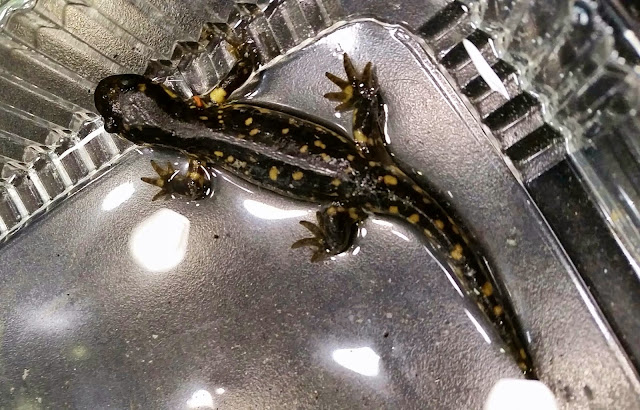 Google helped me ID the type of salamander this little guy was - a Slimy Salamander. Apparently, they are very common, and a few of my coworkers were all telling me stories of how they all used to find them, and now their kids find them. This was a first for me. 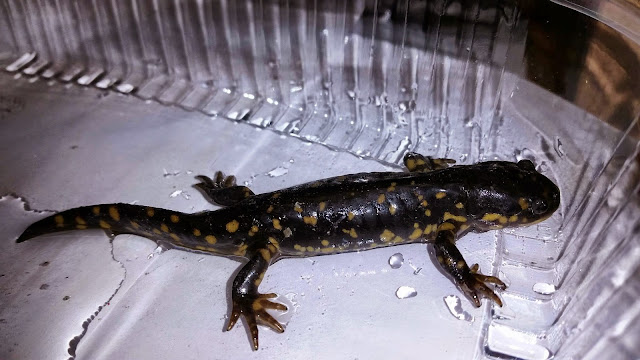 After some research on the habitat, I released the little guy back outside of the door where I think he snuck in from. Hopefully, he was able to find his way back to Momma or where ever it lives. 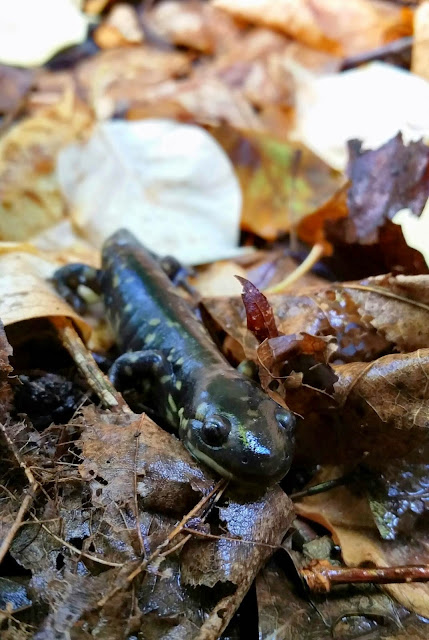 Saw a Cardinal right after I released the salamander. 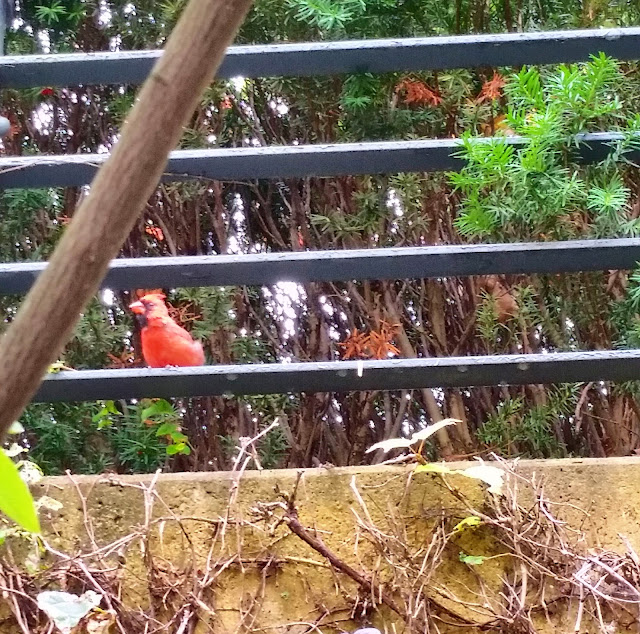 I've made some more cosmetic modifications to my Subaru Outback. Looking for more of a rugged look, I used black Plasti Dip to color a few things.

Let me know what you think! 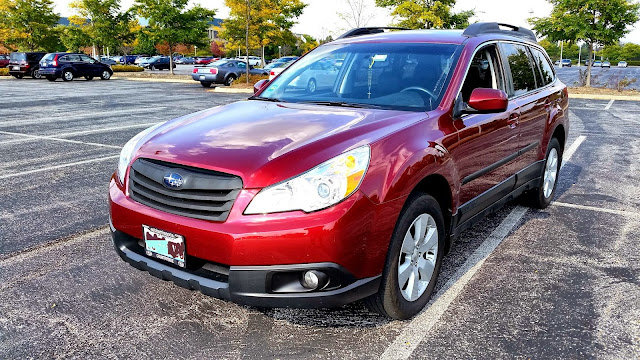 Fall is here, and this tree has probably is all different sorts of fall colors by now.

Does anyone have a special place they like to visit to see all of the wonderful colors the trees display this time of year? 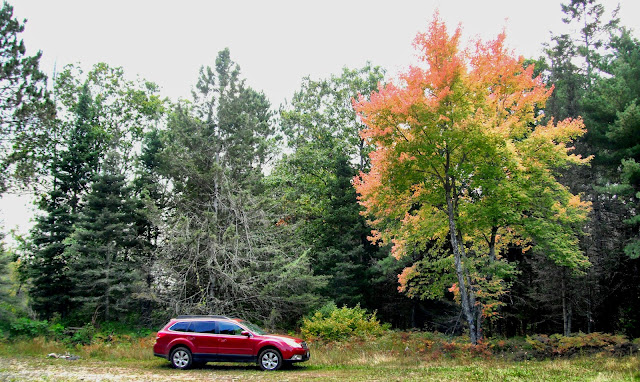 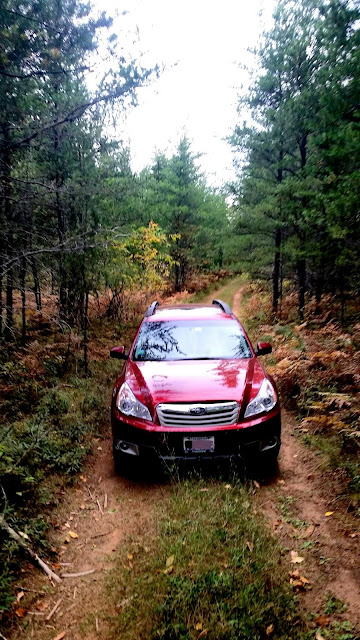 New sticker has been added to my Outback.
Yep, I'm a Star Wars fan.

I BELIEVE IN DRAGONS

There really are no other words that could express my excitement, except for those above, in bold capital letters.

I've been hunting this fish for awhile now. Every outing in musky waters I have gotten closer and closer to landing one. From the follows, swipes, blisters, broken leaders, lost flies, broken rods, sore shoulders, and beaten down confidence, I finally caught my mythical creature, I finally, got my musky. 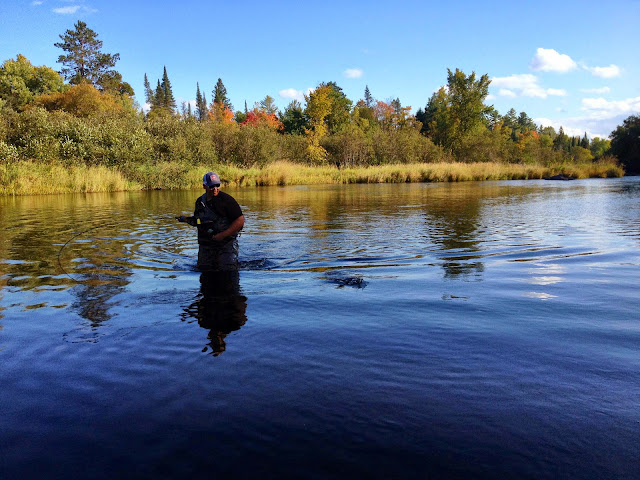 This was such a special catch for me. Not only did I just catch my first musky, it was a wild musky. I caught it while utilizing my preferred method of fishing - fly fishing, and on a fly that I tied! EXTRA SPECIAL BONUS!!

It was also my first outing with my brand new 10 wt rod that Ed over at FSA Custom Rods finished just days before. The rod is now named "Dragon Slayer." 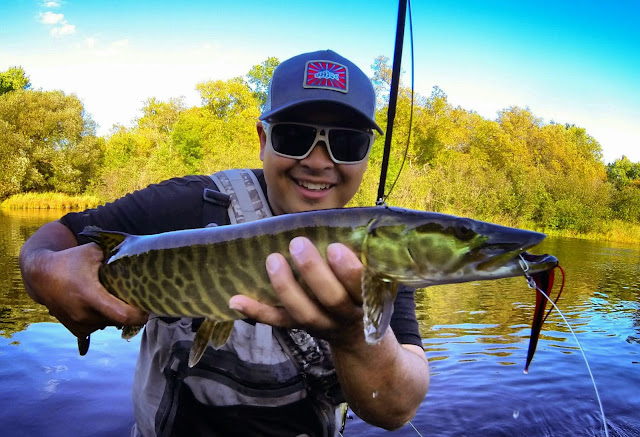 I'm not really big on weighing or measure fish, but I estimated this one to be about 20 inches, but who cares...it's a musky!!!! 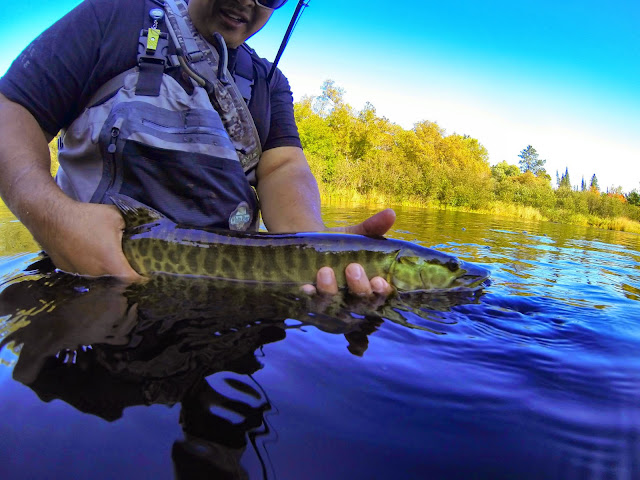 I have stared at these pictures multiple times a day since the catch. It's hands down the most beautiful fish I have ever caught. Nothing I have ever caught before compares to the emerald green shimmer and markings of this apex predator - Beautiful Violence. 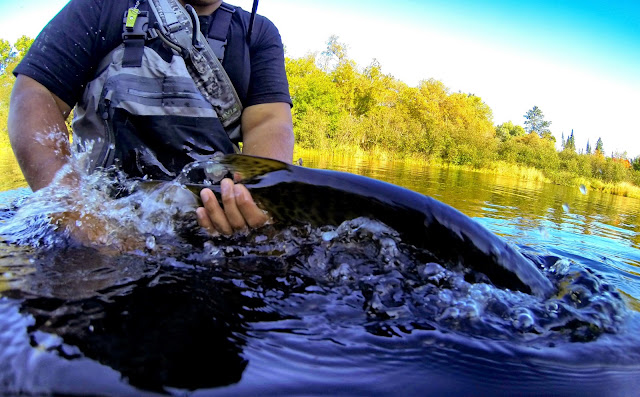 I can see how guys become totally obsessed with this fish. I believe, that I have just become one of them.